The LISA Pathfinder scientific collaboration will meet in Trento, together with key representatives of the space agencies and industries that made the mission possible, to discuss the scientific results and to celebrate the outstanding success of the mission.

LISA Pathfinder is the European Space Agency (ESA) precursor mission to the LISA space-based gravitational wave observatory that the agency is developing within the Cosmic Vision Programme. LISA Pathfinder has been developed within an international collaboration led by ESA and including the space agencies of France, Germany, Italy, Spain, Switzerland, The Netherlands and United Kingdom, and NASA.

LISA Pathfinder has demonstrated that the sophisticated space-time measurements that are the core metrology for a gravitational wave observatory are indeed feasible, at and beyond the precision required by LISA, a leap of several orders of magnitude in the field of gravitational physics.

As a consequence of these results, even exceeding the mission requirements, ESA has given a final green light to the development of LISA.

The LISA Pathfinder mission concluded its post-operation phase at the end of 2018, but the scientific data it has produced will be further analysed and exploited for quite some time in the future.

Scientists, engineers and students from institutions from all over the world that have collaborated on the project, with gather in Trento on September 11-13, in the fascinating location of the Trento Museum of Science, to discuss the results and their impact on LISA, to plan future work, and to celebrate the success of their teamwork.

The event (by invitation only) is sponsored by ESA, the Italian Space Agency (ASI), the Italian National Institute for Nuclear Physics (INFN), the University of Trento and the Trento Museum of Sciences (MUSE).

Today, the final paper on the achieved differential acceleration noise performance was publishe din Physical Rveiew Letters. The paper can be downlaoded from:

Today at 18:00UTC, the PI of the LTP, Stefano Vitale, had the honour of sending the last telecommand to LISA Pathfinder. This command instructed the satellite to switch off its transponder, thereby ending the mission.

Today, the science operations of LISA Pathfider came to an end. The mission has performed has been a great success and paves the way for LISA.

At the 154th meeting of the SPC, LISA was selected as the 3rd Large Class mission (L3) of the Cosmic Vision Programme. L3 has a nominal launch date of 2034.

In preparation for the end of the LISA Pathfinder mission in June, the Mission Operations Centre team have started the de-orbiting manoeuvre out of the LPF L1 science orbit. The manoeuvre was minimal., and allows LPF to operate undisturbed unti the end of operations.

The DRS have retaken control of the satellite to perform the remainder of their operations. The DRS operations are scheduled to last until end April.

The longest noise run yet performed by LPF was successfully completed on 4 March. The system had bene putinto its quietest state, and the residual noise was measured for a period of 3 weeks. Results will be published after the data has been fully analysed.

During the nominal science operations, it was apparent that the performance of the instrument was limited by Brownian Noise in the mid-band frequencies. This noise source comes from the bombardment of residual gas in the electrode housing on the tets mass surfaces. As the system is vented to space, the pressure (and hence Brownian noise) has continued to fall, such that the limiting noise is now significantly lower than during the nominal mission. However, the pressure can also be reduced but reducing the temperature of the system. This was done at the start of 2017, when the LTP core assembly temperature was recuced from ~22C to ~11C.

The LTP has now taken back control of the satellite, and science operations have restarted. The extension will again be shared with teh DRS, who will operate in March/April 2017.

The DRS science operations began on 2 July. The scinece phase willlast ~90 days, and will focus on te characterisation of a new type of micro-thruster (collidal micro-Newton thrusters), as well as on the control and stability of the spacecraft and test masses

Today marks the ned of the nominal science phase of the LISA Technology Package on board LISA Pathfinder. The LTP has demonstrated a perfromance beyond the pre-launch requirements, and is now approaching the performance required for the full LISA mission.

At the 150th meeting of the Science Programme Committee (SPC), the delegates unanimously voted to extend the LISA Pathfinder mission until end May 2017

The first results of differential acceleration between the test masses was published today in Physical Review Letters. The papoer can be accessed from: https://journals.aps.org/prl/abstract/10.1103/PhysRevLett.116.231101

On 15 February, the first of the LISA Pathfinder test masses was released from its mechanical holding devive. On the 16th the second test amss was also released successfully. Both test masses are now free floating inside the spacecraft

Following the successful separation from the launch vehicle, the mission operations team at ESOC undertook one of the most complex Launch and Early Operations Phases (LEOP) ever undertaken or an ESA mission. The team commanded five apogee raising manoeuvres, which slowly boosted the elliptical orbit's apogee (furthest point from the earth). On the 6th manoeuvre, commanded on the 12/12/2015), LISA Pathfinder left the Earth behind and headed out towards its final orbit around the 1st Sun-Earth Lagrange point. It will take an additional 6 weeks to reach the final operational orbit.

At 04:04UTC on the 3rd December, LISA Pathfiner succsessfully launched on top of a VEGA launcher. The rockets first three stages burned for ~7minutes, followed by a nine minute buirn fo the rockets upper stage. This put LISA Pathfinder in a ballistic trajectory around earth. Approximatley 1hr 40minutes afetr launch, the upper stage fired again, placing LPF into its final parking orbit of 206kmx 1540km. Immediately after separating for the launcher, the mission operations tema at ESOC acquired the first signal from LISA Pathfinder, confirming ithe succesful launch and separation.

The final environmental test of the LISA Pathfinder development has been successfully passed this week. The Acoustic Noise test simulates the noise experienced by the launch composite during the first few seconds after launch (due to the main rocket engine). The launch composite must withstand noise levels of >140dB!

Today, the LISA Technology Package Core Assembly (LCA) arrived at the IABG test centre (Ottorbunn, Germany). The LCA will now be integrated to the spacecraft, forming the complete science module of LISA Pathfinder.

Today, at the Airbus Defence and Space (Friedrichshafen) facility, the vibration testing of the LISA Pathfinder Core Assembly (LCA) was successfully completed. Following some workmanshp tests, the LCA will be delivered to the IABG testing facility near Munich, where it will be integrated to the spacecraft module. 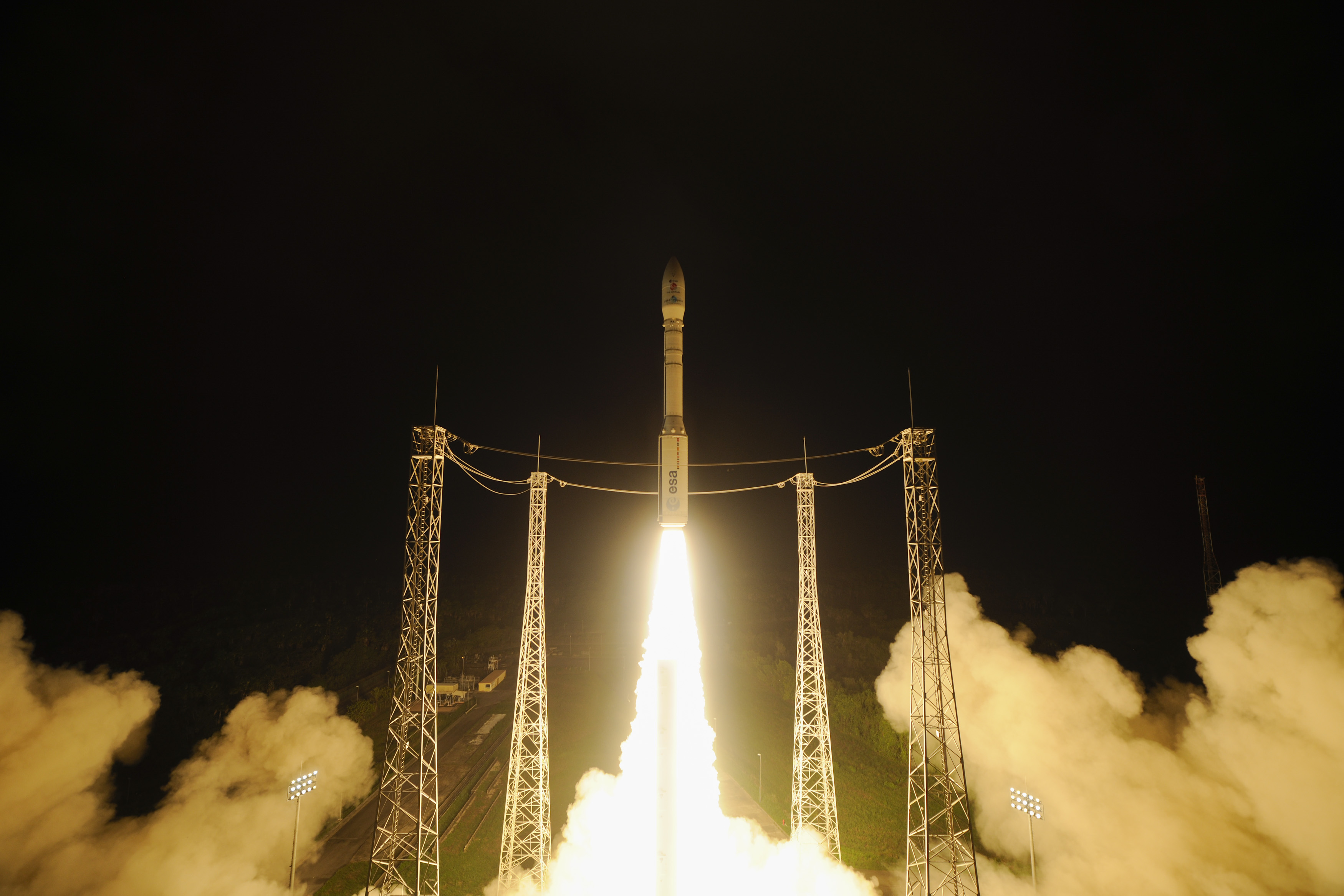 Launch of LISA Pathfinder atop the VEGA launcher designated VV06