The Second AKARI Conference: The Legacy of AKARI: A Panoramic View of the
Dusty Universe (27-29 February 2012) 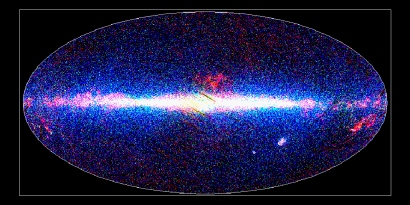 AKARI (formerly ASTRO-F), is the first Japanese satellite dedicated to infrared astronomy, from the Institute of Space and Astronautical Science (ISAS) of the Japanese Aerospace Exploration Agency (JAXA). Its main objective is to perform an all-sky survey with better spatial resolution and wider wavelength coverage than IRAS, mapping the entire sky in six infrared bands from 9 to 180 micron.

AKARI operated with a 68.5 cm-diameter telescope cooled down to 6K and observed in the wavelength range 2-180 µm from a sun-synchronous polar orbit at 700 km altitude. It was successfully launched at 21:28 (UT) on 21 February 2006 by an M-V rocket from the Uchinoura Space Center (USC), Japan. AKARI ran out of its on-board supply of cryogen, liquid Helium at 08:32:40 (UT) on August 26th, 2007, after successful operation and observations that began on May 8th, 2006, achieving the expected lifetime of 550 days. More than 94% of the sky was covered in survey mode.

AKARI also performed more than 5,000 pointed observations over the wavelength range 2-180 µm in 13 bands, providing comprehensive multi-wavelength photometric and spectroscopic coverage of a wide variety of astronomical sources: nearby solar system objects, zodiacal light, brown dwarfs, young stars, debris disks and evolved stars in our Galaxy and in other galaxies of the Local Group. It will also probe galaxy evolution and the large scale structure in the Universe out to great distances. An extensive and dedicated coverage of two high-visibility regions, the Large Magellanic Cloud and the North Ecliptic Polar region has also been performed.

ESA is collaborating with JAXA/ISAS in order to increase the scientific output of the mission by capturing all of the possible data (providing tracking support from the ESA ground station in Kiruna in the cold phase) and to accelerate the production of the sky catalogues, which will be extremely valuable in the exploitation of the Herschel and Planck missions, in return for 10% of the observing opportunities in the non-survey parts of the mission, distributed to European scientists, via the traditional route of Calls for Proposals, followed by peer-review. ESAC provides attitude reconstruction for the survey data and support to European users for the pointed observations. The latter activity is maintained via this Web site. Other institutes collaborate in the AKARI mission. A consortium including Imperial College University of London, Open University, University of Kent, Sussex University, and SRON-Groningen with University of Groningen participates in the data reduction of the All-Sky Survey. Seoul National University representing the Korean community also joins the data reduction activity.