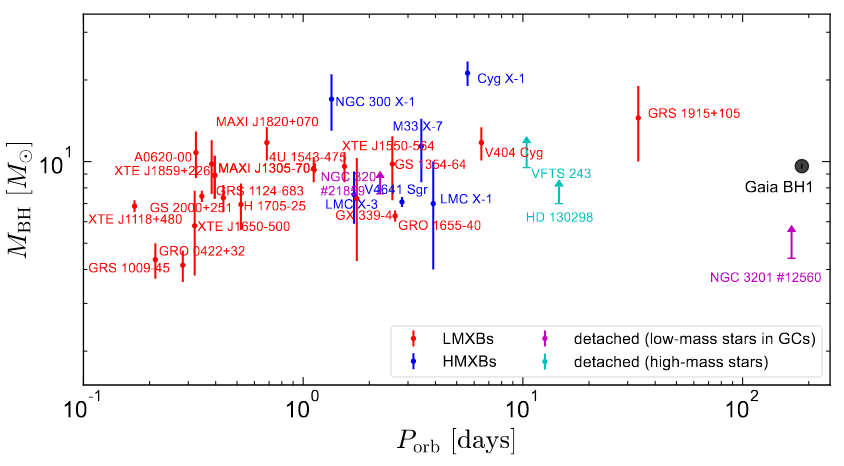 As was already hinted at in one of the papers of the Gaia Collaboration "Gaia Data Release 3: Stellar multiplicity, a teaser for the hidden treasure", the Gaia mission is expected to find dark companions of stars, like dormant black holes or dormant neutron stars.

Since Gaia's data release 3 and more specifically the release of the multi-star catalogue, the community dived into the data, found a candidate dormant black hole in there, and immediately followed it up with other telescopes.

This led to the first confirmed discovery of a black hole with Gaia data. The black hole is referred to as Gaia BH1 and is also the nearest black hole ever found. It is located at 480pc from the Sun, which is 3 times closer than the next-closest black hole. What a nice surprise for Gaia to find its first black hole right in our Solar neighbourhood.

The black hole was discovered by looking carefully at the companion star position. The star itself is nothing out of the ordinary, it is a Sun-like star and a plain main-sequence star. But the wobble seen in its position, as observed with great accuracy by Gaia, points to the existence of a companion. The heavier the companion, the larger the wobbling seen. This time, the wobble was caused by a heavy dormant black hole, with a weight of about 10 Solar masses.

Animation: The observation of a star is affected when a companion is present. This animation shows first the combined sky-projected motion due to parallax and proper motion, and then the resulting motion when the photocentre movement due to a companion is added. Credits: ESA/Gaia/DPAC - CC BY-SA 3.0 IGO, acknowledgements: Johannes Sahlmann (RHEA Group for ESA) who made use of https://github.com/ManimCommunity/manim

Black holes can either be active or dormant. When active, they emit high-energy light. While dormant, they do not emit at all and are a lot harder to find. It's like looking for a black object against a black sky. It's still there but difficult to see. The main way to spot it is by observing its gravitational interaction with its neighbourhood. The sole reason this black hole could be found was due to Gaia's ability to see the position of the star (that is orbiting about it) with such a high precision. This position wobbles about when the star moves around the black hole.

This star was already identified to have a companion with Gaia's data release 3 and is part of Gaia's catalogue of over 800,000 multi-star systems. An international team of researchers immediately looked into this specific case after Gaia's data release 3 and organized follow-up observations around the world with 7 different spectrographs and telescopes: LAMOST, MagE, GMOS, ESI, XSHOOTER, FEROS and HIRES to obtain more detailed spectra of the source. 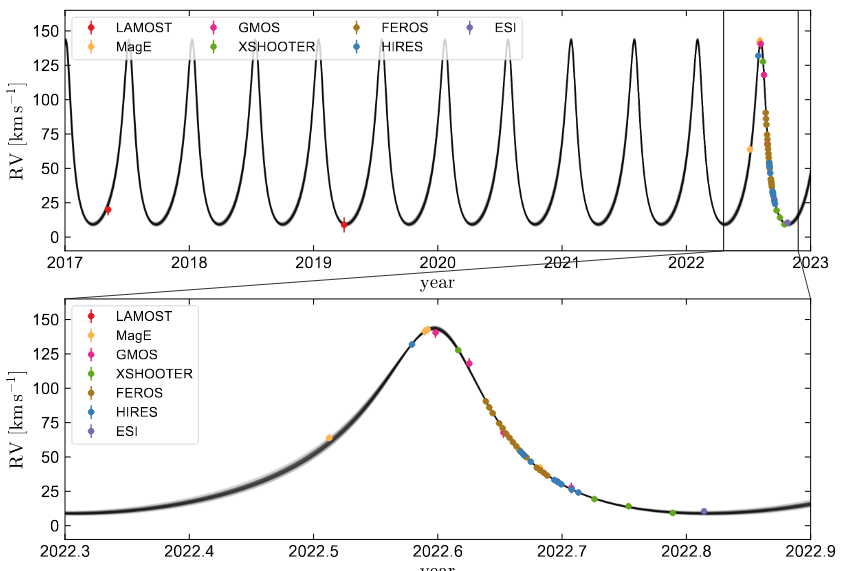 Figure 2. Overview of the radial velocities for Gaia-BH1 as obtained by the LAMOST survey and from follow-up observations with the MagE, GMOS, XSHOOTER, ESI, FEROS and HIRES spectrographs. Points with error bars are measurements, gray lines are drawn from the posterior when jointly fitting thse radial velocity spectra and the Gaia astrometric constraints. Credits: El-Badry et al. MNRAS 2022.

The fact that the star is very similar to the Sun is also quite special. It is different from the companions of most other known black holes (see the location of the newly found Gaia-BH1 with respect to the other known black holes as highlighted in Figure 1). If this system also contains planets, like a large fraction of solar-type stars do, it would be an even more interesting object for further studies!

Although it is the first object of the kind to be discovered, the implied occurence rate (it is after all 3 times closer than the next-nearest black hole) suggests these kinds of dormant black hole binaries are about 10 times as common as X-ray bright systems. They are just harder to find. Gaia's data release 4 is expected to reveal many more of these systems.

One of the main things the stellar physics and gravitational wave communities have been hoping Gaia will do is to find systems like this. There have been many papers forecasting what Gaia will find (Mashian, Loeb (2017); Breivik, Chatterjee, Larson (2017); Shao, Li (2019); Andrews, Breivik, Chatterjee (2019); Chawla, Chatterjee et al. (2022); Janssens, Shenar, et al. (2022)). In recent years, a lot of candidates were investigated which turned out to be false positives; this system is quite different from them, and truly unambiguous. After decades of searching for this kind of systems, Gaia is finding its first dormant black hole in our Galaxy and it is immediately a spectacularly interesting one as well.

The paper by El Badry, et al. describing this finding was accepted by MNRAS. Find more details as well in the press release by MPIA.

This video created by MPIA zooms into the Milky Way to the position of the stellar black hole “Gaia BH1”, currently the black hole closest to Earth. After arriving at the location, we see the orbit of a Sun-like star around Gaia BH1. Video Credits: T. Müller (MPIA), PanSTARRS DR1 (K. C. Chambers et al. 2016), ESA/Gaia/DPAC (CC BY-SA 3.0 IGO)

Credits: Story written by Tineke Roegiers, in collaboration with Kareem El-Badry and Frédéric Arenou, and based on the results presented in El Badry, et al. MNRAS 2022