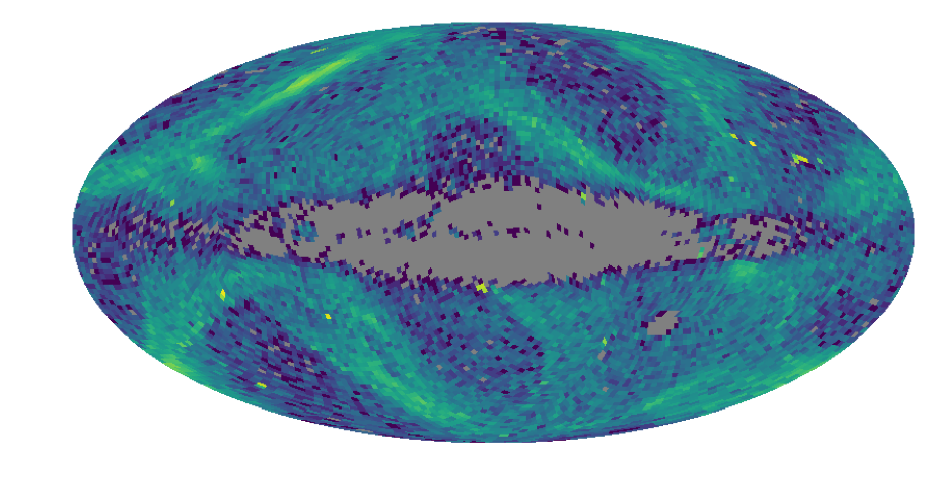 The all-sky distribution of candidate transients detected during the year 2018 using the GaiaX algorithm (Kostrzewa-Rutkowska et al. 2020). The map resolution is HEALPix of nside 32. The plot is in Galactic coordinates.

Motivated by the recent developments in multi-messenger astronomy, and in particular the detection of an electro-magnetic counterpart to the gravitational wave (GW) event GW170817, and by the non-detections of subsequent GW events involving at least one neutron star, a contribution from Gaia to this emerging field has been discussed.

This Gaia contribution requires an improvement of the sensitivity of the Gaia Photometric Science Alerts stream, in two ways:

There are very good reasons for having these restrictions in routine operations – they minimise the false alarm rate. But this comes at the price of reduced completeness (Hodgkin et al. 2021), especially for fast and faint transients (such as kilonovae). When there is a coincidence with other surveys (be they electromagnetic, or gravitational wave), one can afford to be more relaxed, and take advantage of this coincidence in time and position.

LIGO/Virgo run number 4 is expected to start in about one year, and will include public releases of high signal-to-noise GW events. Gaia Photometric Science Alerts could then contribute to the search for the optical counterpart of any new GW event by publishing our extra (though less pure) alert stream (called GaiaX).

The Gaia team involved has been running tests behind-the-scenes, and has identified most of the causes of single-transit spurious detections, which could have a variety of causes, such as the detection of solar system objects or artefacts from bright stars. What is left now is a background rate of detections (about 50 per day) that is not fully understood. These may be caused by different artefacts of unknown nature, but it is expected that an important fraction of this background rate of detections may actually be real astrophysical events.

Ahead of turning on the GaiaX stream of alerts fully, an experiment will be performed. The Gaia on-sky field-of-view will be observed simultaneously with the MeerLICHT telescope. True astrophysical events should be common to both telescopes. During this initial phase the GaiaX detections will be published, in the hope that they could lead to exciting new science, or (at the very least) help to provide a detailed investigation of the GaiaX transient candidates.

The test phase of the new GaiaX alert stream will be available at this website from 1st September 2021, and will last for four weeks. The data are organized by IDT run number (Initial Data Treatment, operated at SOC, with an approximately daily processing cadence). The index page of the GaiaX alerts homepage lists the start and end times of the observations included in each run, and the number of alerts detected in the run. Also, the date of publication of the run is given, and for each run, a link to a CSV file containing the GaiaX alert candidates.

When using these data, please credit the work of the Gaia Data Processing and Analysis Consortium by adding an acknowledgement to your work as follows:

“This research or product makes use of public data provided by ESA/Gaia/DPAC/CU5”, and please include the following references in any publication: Kostrzewa-Rutkowska et al. 2020 (MNRAS, 493, 3264), and Hodgkin et al. 2021.