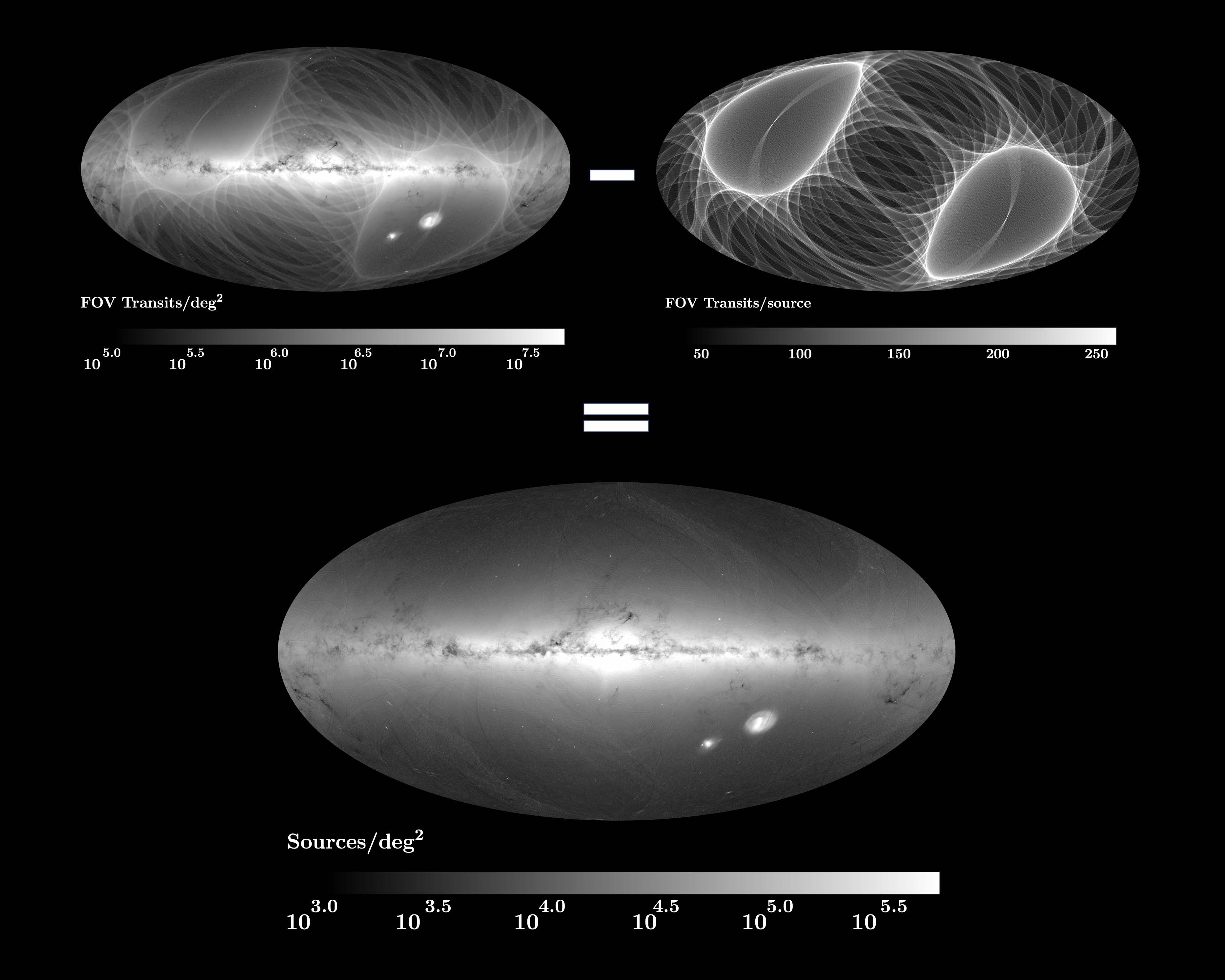 The three plots show an all-sky Hammer-Aitoff projection in galactic coordinates giving respectively : top left : the number of transits per square degree detected with Gaia in seven years (August 2014 to July 2021). In total 170 billion detections have been summed up to generate this plot, resulting in a realistic picture of how the raw data is distributed. top right : the number of observations per source computed with the Gaia scanning law over the same seven years, showing the highest coverage at 45 degree of ecliptic latitude, and the slight trace of the initial scan through the ecliptic poles. bottom : the raw data corrected for the bias due to the scanning law pattern, expressed as the number of sources per square degree. This is a sky-map, but produced without plotting stars.

Everyone working in the DPAC or using the Gaia results knows how much mathematic modelling and computer science take place behind the stage to transform the dull raw material delivered by the telescopes into an incredible epoch-making catalogue.  In this story one shows that with only simple arithmetic, repeated additions (admittedly nearly 180 billion!) and a bunch of divisions one can already tell how many stars Gaia sees, and map the sky with a surprising and exquisite level of detail, hardly discernible from a map computed from the full catalogue. This is made possible by charting the daily on-board detections corrected for the uneven pointings brought about by the scanning law.

The scanning law of Gaia stands for the way the different directions of sky are explored as a function of time. Gaia is not like the Hubble Space Telescope, for example, a pointing instrument directed to a particular area of the sky to collect the light over long exposures to integrate more photons. Gaia, like its predecessor Hipparcos, is a scanning satellite, constantly in motion with no way to adjust the exposure to the source brightness. Thus, over the time, Gaia instruments sweep a great circle of the celestial sphere whose orientation is slowly altered in such a way that after a few months the whole sky has been visited.  This is repeated year after year, but never identically. Sources are then detected repeatedly with a rather irregular time sampling, but typically a new visit occurs every two months with large variations about this mean. At the end, the number of detections in a particular direction is a complex combination between the actual stellar density on the sky and the number of times the Gaia pointing has passed over this region.

The Gaia continuous scanning amounts to 70 million detections per day on average resulting in more than 170 billion over seven years, a huge, huge number. Each detection is given a unique identifier encoding the approximate position, the magnitude, the field of view and the date at which this has been recorded to micro-second accuracy. This is stored in computer files, typically one every day, that are the main input of the Gaia cyclic processing. Here I read these files in sequence to count and locate the detected sources and eventually visualise the numbers with maps instead of spreadsheets. The vast majority of the detections correspond to stars in the Milky Way.  But there are also the moving sources from the solar system (removed in this selection) and a few millions of extragalactic sources. There is also a fraction of spurious detections that are identified later in the processing and deleted from the data but not removed in this map.

The upper-left image is a density map of the 170 billion raw detections, over a period of seven years, from the start of the scientific mission in July 2014 until 30 July 2021. The detections are added one by one in counters, one per map pixel. There are about 3 million pixels in the map, leading to an average of 55,000 detections per pixel, with large variations from place to place.  Given the pixel size this gives an average density of 4 million detections per square degree as shown in the scale below the map. The scale shows also the extent of the variation between 100,000 to almost 100 million detections per unit area. The map shows that the number of detections is a combination between the number of sources per square degree in a particular direction, primarily determined by the galactic latitude, and the number of observations per unit of time allowed by the Gaia scanning law. The two features are nicely entangled in this map as though one had superimposed the sky coverage map from the Gaia scanning over an astronomical sky map. But this is not the case, each density is exactly what one has in the Gaia raw data. This map is very similar to the image of the week of 26 February 2021 constructed during the IDU filtering on the cycle 4 data.

Would it be possible to remove the scanning law loops which look like a foreground or a watermark blurring the Milky Way? Well, this is not really a foreground, but just a complex density map combining two effects resulting in this density distribution. However, the Gaia scanning law is perfectly known, as is the satellite attitude over the seven years of operation.

The actual coverage is shown in the upper-right map giving the expected number of times the Gaia FOVs should go through every direction over exactly the same period of time. This is a well known plot shown here in galactic coordinates, with the ecliptic poles near the centres of the small circles at 45 degrees of ecliptic latitude. On can see the graceful imprint of the peculiar scanning (perpendicular to ecliptic and visiting the ecliptic poles every six hours) during the first month of the mission in August 2014. The area around these two small circles are the most frequently visited by the Gaia telescopes, while the ecliptic plane is under-observed. All the details of the scanning loops are visible with some attenuation in the first density map.

By weighing the detection density by the inverse of the number of FOV crossings, one should largely reduce the visible structures coming from the scanning law and come nearer to a true celestial map, corrected for the bias brought about by the irregularities of the sky coverage. This was what I hoped when starting this project, but this went way beyond my wildest expectations.

The result is displayed in the lower map, given now a quantity that it is reasonable to label as "number of sources per square degree", although no match has been used to associate repeated detections to unique sources and no sources have been counted. The map is almost free of any remaining pattern from the scanning law, but the large area in the high galactic latitude with lower density, clearly related to loop of the second map at the same location. With this crude count one finds 37,500 stars per square degree equivalent to a full catalogue of 1.6 billion stars. This underestimates a little the true content of the Gaia catalogue because the scaling factor used to normalise the scanning law does not include any dead time, uses a full efficient FOV and is a bit too optimistic.

One can zoom a little in this 'deconvolved map' to discover many nearly dot-like features corresponding to galaxies and globular clusters (Andromeda in the lower left, Omega Centauri right above the galactic plane slightly right off the centre), large enough to be seen as peculiar concentrations of sources, reminiscent of the sky map released with the Gaia DR1 and built with the Gaia catalogue of detected sources matched to the observations. The way any sensible astronomer would think as the only mean to generate an all-sky map. An elder sister of this image appeared also in July 2015 from the on-board counting of stars used for the attitude-control loop, every second of Gaia life. Same overall idea, very different data.

This is remarkable that such a detailed celestial map can be constructed just by counting detections and applying the proper weight to remove almost perfectly the very large irregularities produced by the scanning law. No sophisticated astronomy or mathematics is involved and it could have been proposed as a student term project once he has been given a routine or a table to get the scan pointing at any time. One just needs to handle large data sets, surely a skill that must be learnt.

Credits: F. Mignard, University Côte d'Azur, Observatory of the Côte d'Azur. Thanks to the Gaia web service maintained by CNES in DPCC for making accessible the Gaia detection records on a regular basis for DPAC and to Laurent Galluccio for the smooth extractions into customized smaller files.