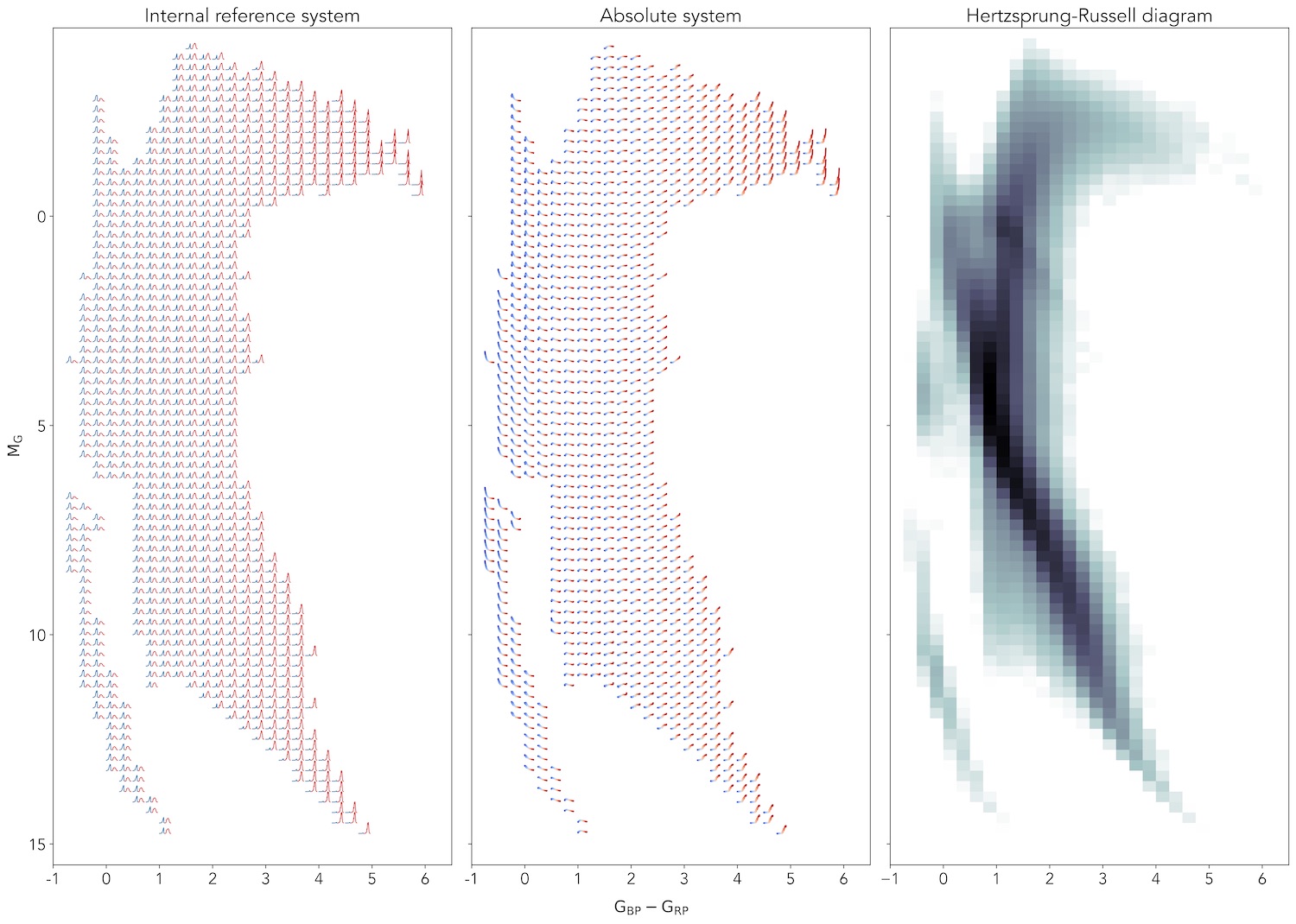 Gaia Data Release 3 (Gaia DR3) will offer for the first time access to a large selection of mean low-resolution spectra obtained from the Blue and Red Photometer instruments (BP/RP). Spectra for about 220 million sources, mostly brighter than 17.65 in G, will be available in the internal reference system and in the absolute system both in terms of flux and wavelength. In the absolute system, the BP and RP spectra will be merged to form one single spectrum per source.

Detailed information about the BP/RP spectral data in Gaia DR3 will be available in a number of papers. De Angeli et al. 2022 will describe the processing that converts the raw data into mean spectra in an internal reference system that is homogeneous across all instruments (defined by different CCDs and instrumental configurations and by their variations in time). Montegriffo et al. 2022 will detail the algorithms defining the calibration that links the internal system to the absolute flux and wavelength system. Both these papers will show several results of the validation done by the same team that processed the data. Finally, Babusiaux et al. 2022 will include a section on the independent validation of the BP/RP data in Gaia DR3.

The Hertzsprung-Russell diagram (HRD) is a fundamental tool for studying populations of stars. It represents a snapshot of stars at different evolutionary stages, traced by their colour (temperature) and brightness (luminosity). At the beginning of their life cycle, stars start their journey at different points along a curve called `Main sequence' - with bluer stars roughly being the brightest and hottest. They eventually progress towards the `Giant branch', with the less massive objects ending their evolutionary track as white dwarfs. This simple picture is complicated by their different properties, as stars are not born from clouds of pure hydrogen, but instead have a differing amount of heavier elements.

Figure 1 gives a birds-eye view on the BP/RP spectra variations across different populations in Gaia DR3. An HR-Diagram (shown in the right panel) has been populated with all sources with apparent magnitude in G brighter than 17 mag that have mean BP/RP spectra in the release. Parallaxes from EDR3 have been used to compute the absolute magnitude. The HR-Diagram has been split in cells in absolute magnitude and colour. For each cell, 10 to 100 sources were selected among objects with good parallax measurement (parallax over parallax error larger than 5) and off the Galactic plane (absolute galactic latitude larger than 20 deg). A median spectrum per cell was computed from the sampled spectra of the selected sources both in the internal reference system in flux and pseudo-wavelength (shown in the left panel) and in the absolute system in flux and wavelength (in the central panel). All sequences of the HR-Diagram are nicely populated. Even though the individual spectra appear quite small in this figure, the large variations, mostly related to the colour of the sources, are still very visible.

Complementary to the picture in Figure 1, an application has been developed to interactively display the spectra across the HR-Diagram. The app displays the average spectra (dark blue curve in the right panel) of stars binned according to their GBP-GRP colour and absolute magnitude, while the light blue shaded area represents the variation of the spectrum within each particular bin of the HRD. The purest and the easiest sample of stars to interpret is the subset of 259,863 stars out to 100 pc, produced by plotting the stars from the Gaia Catalogue of Nearby Stars (GCNS) with Gaia DR3 XP spectra. In the very near future, this app will be enhanced to show different samples of stars and to also show the BP and RP spectra in the internal system. The app can be accessed here and a screenshot is shown in Figure 2.

Spectra in the internal and external systems shown in the figure and application were generated from the data available in the archive using the Python package GaiaXPy (see https://www.cosmos.esa.int/web/gaia/iow_20220519 for more information).