By the dawn of the 19th century, our Solar System was still a relatively unpopulated place, containing only a small bunch of big celestial bodies: the planets. But on that January 1st, 1801, this picture started to change thanks to the discovery, by the priest astronomer Giuseppe Piazzi, of a “minor planet”. He named it as “Ceres”, after the Roman goddess of grain and fertility.

As we know today Ceres is just the largest member (975 km in diameter) of a large population of asteroids, reaching more than 750.000 objects and still growing fast, as smaller and smaller objects are observed. The development of modern telescopes and detectors has strongly enhanced the pace of discoveries over the last year. To have an example of that, it is sufficient to look at the second Data Release of Gaia, in which the observations of 14.099 asteroids are published, collected in less than 2 years. But, it took nearly two centuries after Piazzi’s finding (i.e. till the mid-1990s), to discover as many asteroids from the ground!

The published Gaia data set in data release 2 only contains a selected sample of asteroids, as the observations of many more have already been collected, and will become available in future releases. By the end of the mission there will most probably be more than 300.000, and the accurate positions, 100s times better than in the past, will disclosing new possibility of investigation.

The pictures above (Figure 1a and b) show a colorful plot of the orbits of the asteroids in Gaia’s second data release, between the Sun and Jupiter. As usual in scaled plots, the Solar System appears crowded and individual lines merge in the region of the Main Belt, between Mars and Jupiter, where most asteroids concentrate. In reality, of course, these asteroid trajectories are millions of km apart.

In the plot at the left, orbits are colored according to the perihelion distance, in other words their minimum distance from the Sun. Blue trajectories are rather eccentric and belong to Near Earth Asteroids. The green population is the Main Belt. Farther away from the Sun, the gravitational perturbations induced by Jupiter prevent to have a stable population, with the exception of the Trojan asteroids (in red) that precede and follow the planet on its orbit in safe regions of stability.

In the plot to the right, asteroid orbits are colored following their albedo, i.e. the “lightness” of the surface of an asteroid. The fingerprint of a gradient of composition appears, with dark asteroids (in red) dominating the external regions, while lightest bodies are in the inner main belt. This pattern is probably inherited from the formation of the Solar System, however on the top of it a certain degree of mixing appears. The short-lived Near Earth Asteroids sample populations of different albedos.

The data on albedos are produced from the Wide Infrared Space Explorer (WISE) of NASA, but in future data releases Gaia will also provide asteroid spectra and permit a complete characterization of the asteroid belt. The combination of dynamical and physical data by Gaia, plus other surveys, is offering an unprecedented opportunity to better understand the origin and the evolution of the Solar System. 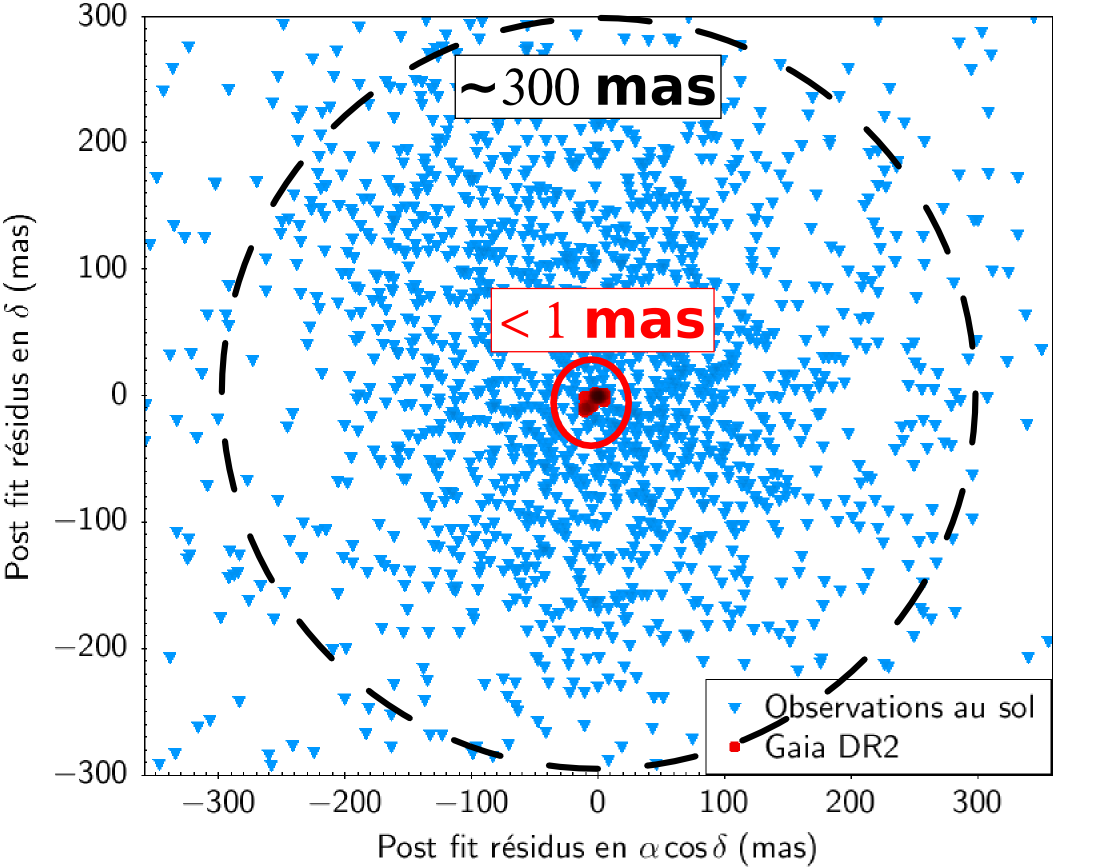 Figure 2. For this plot, all the observations of an asteroid, from both ground-based telescopes and Gaia, are used to determine its precise orbit. The figure represents the spread around the position of the asteroid, derived from this orbital model, for the archive data (in blue) and for Gaia (in red). All Gaia data points are scattered in a tiny circle, about 300 times smaller than the previous data. This difference illustrates well the typical, dramatic increase in accuracy brought by DR2. Credits: ESA/Gaia/DPAC, F. Spoto

For the Data Release 2 of Gaia, the main focus is on astrometry. Figure 2 and 3 illustrate the accuracy of the measurement of asteroids and the breakthrough that they represent. An orbit has been adjusted to all Gaia measurements of all asteroids present in Data Release 2. An example of the results is shown in Figure 2. Figure 3 represents the residuals (the difference between the observation and the position provided by the orbit) for each observation. On average, the residuals increase with magnitude: fainter objects are more difficult to measure and give larger errors. However, one can notice that the measurements are always more precise than 10 mas, and the residuals fall below 1 mas in the range of magnitude below G~18.

It is the first time that such a massive amount of sub-miliarcsecond measurements is available. Many applications will strongly benefit from them, such as the search of the signature of subtle non-gravitational perturbations modifying asteroid orbits, or the prediction of stellar occultations (when an asteroid briefly passes in front of a star). Through these approaches, Gaia is going to impact at a large extent our understanding of the small body population and of their physical properties. 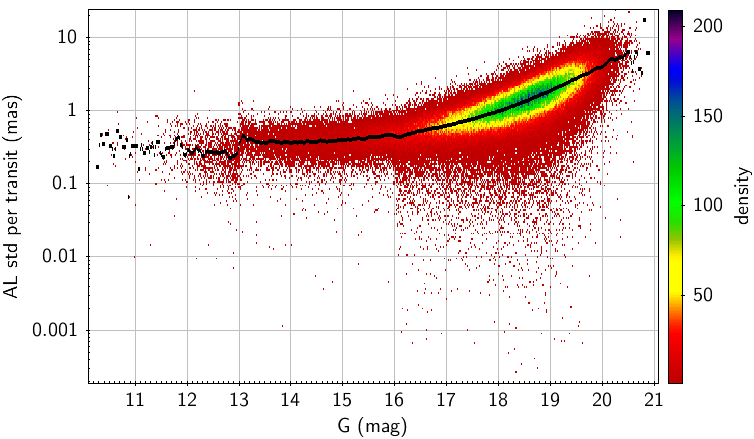 Figure 3. Average residuals of the orbital fit to the asteroid observations published in DR2. Each point represents a different transit on the Gaia focal plane, and the residuals are measured in the direction of the Gaia scan (AL, along scan). Colors are related to the density of points, and the black line is the average value. For DR2, effects due to the asteroid size and motion are not yet taken into account in the data processing and require more efforts to be corrected. Improvements can be expected in future releases. Credits: ESA/Gaia/DPAC, P. Tanga, F. Spoto

Additional credits: The Wide-field Infrared Survey Explorer is a joint project of the University of California, Jet Propulsion Laboratory/California Institute of Technology, funded by NASA.

Selected asteroids detected by Gaia between August 2014 and May 2016