Are Newton and Einstein in error after all? 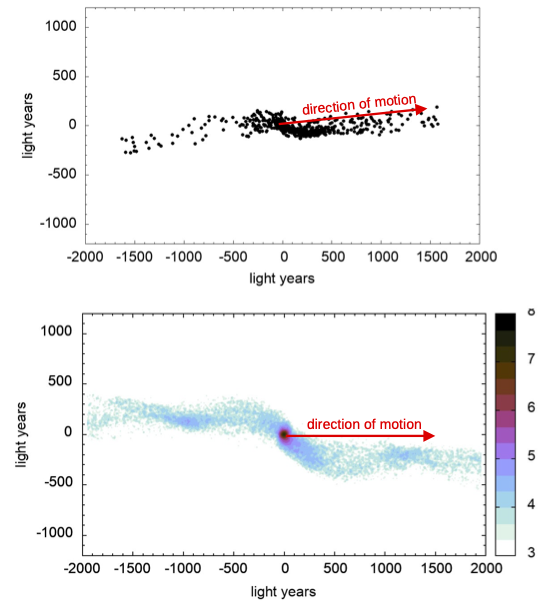 Figure 1. The star cluster is the object at x=0 and y=0, it moves to the right around the Milky Way's centre which is at the bottom. The upper panel shows the observed Hyades open star cluster with the black points being individual stars. The model is shown in the lower panel. In it, the blue regions show the stars that are leaving. The calculation of the star cluster shows how the front part of the tail, to the right, contains more stars (deeper blue regions) than the back tail to the left of the cluster. The calculation was done in Bonn using the new theory of gravitation by Mordehai Milgrom, Milgromian dynamics (i.e. MOND), using the specially developed computer code "Phantom of Ramses". The same calculation using the old theory by Newton and Einstein shows no difference between the front and back part of the cluster. The observed clusters show the same effect as in this lower panel. Credits: Kroupa, Jerabkova et al.

Gaia's new and more accurate data of an extensive set of stars in the Milky Way can be used to look critically at existing theories. Are the observations in line with for example, the current theory of gravitation based on Newton and Einstein. Are they in line as well with different theories? And what does this mean?

Some 400 years ago a brilliant mind thought that the fall of the apple follows the same mathematical law as the movement of the Moon on the sky. Isaac Newton therewith invented the first ever theoretical physics explanation for phenomena thought to be entirely unrelated. He even had to invent a new mathematics to achieve this. Some 300 years later, Albert Einstein reformulated Newton's law of universal gravitation by taking into account that gravitation can spread only with the constant speed of light. Albert Einstein's theory of General Relativity, according to which heavy bodies warp space and time, has been verified incredibly well using observations of how planets move and how black holes distort light. At speeds much smaller than light, Einstein's theory is next-to-identical to Newton's. But even in Einstein's time of 1916, this theory had not been tested on the motions of heavenly bodies beyond the Solar System.

With Gaia's data of stars in the Milky Way, such a test has now been done based on how star clusters loose their stars. Once born, the stars in a star cluster orbit around within it and are constantly pulled this way and that way by their siblings that also move around in the same star cluster. These constant gravitational pulls lead to some of the stars gaining enough speed to finally leave the cluster. Each star cluster thus constantly looses its member stars and thereby dwindles into oblivion. The gravitational theory of Newton and Einstein predicts that, as the star cluster circles about the centre of our Milky Way, an equal number of stars leaves the cluster ahead of it and through its back side. The two streams of ex-cluster stars, one at the front, one at the back, are equal with the cluster at the centre.

A large international team of scientists from Europe, China and Iran and centred on Bonn and Prague, used the precise positions and motions of stars as they leave their star clusters. They used data gathered by ESA's Gaia space mission for five nearby star clusters, and found that all have many more stars in the front tail than in the back tail. This fact is completely impossible if the law of universal gravitation is correct. So the scientists applied another theory of gravitation called MOND, formulated by Mordehai Milgrom in 1983, finding that this theory predicts the observed phenomenon. In this theory, the cluster's gravitational pull on each star gets distorted through the Milky Way causing more stars to exit the cluster in the front than in the back, as is observed and shown in the Figure. Star clusters also die more quickly in this theory, and they start to spin up as they loose their stars.

While MOND in many cases has proven to explain galaxies extremely well, this is the first-ever demonstration that this theory also works for star-clusters (on scales of a lightyear, rather than many hundreds of light years), where dark matter plays no role whatsoever. If the membership selection for stars in the tails of open clusters is done correctly, it is not possible to explain the observed phenomenon with a combination of Newtonian gravitation plus dark matter, as is done for galaxies.

This finding can have dramatic consequences for all of physics and for cosmology, because it could mean that gravitation is neither Newtonian nor Einsteinian beyond the Solar System, such that all calculations ever performed of galaxy evolution and of how galaxies form in the Universe are wrong. To investigate if this is the case, it is advised that many more star clusters are observed to verify and deepen our understanding of how stars leave their clusters, and that new computer algorithms are developed to allow such calculations to be done much more precisely and accurately.