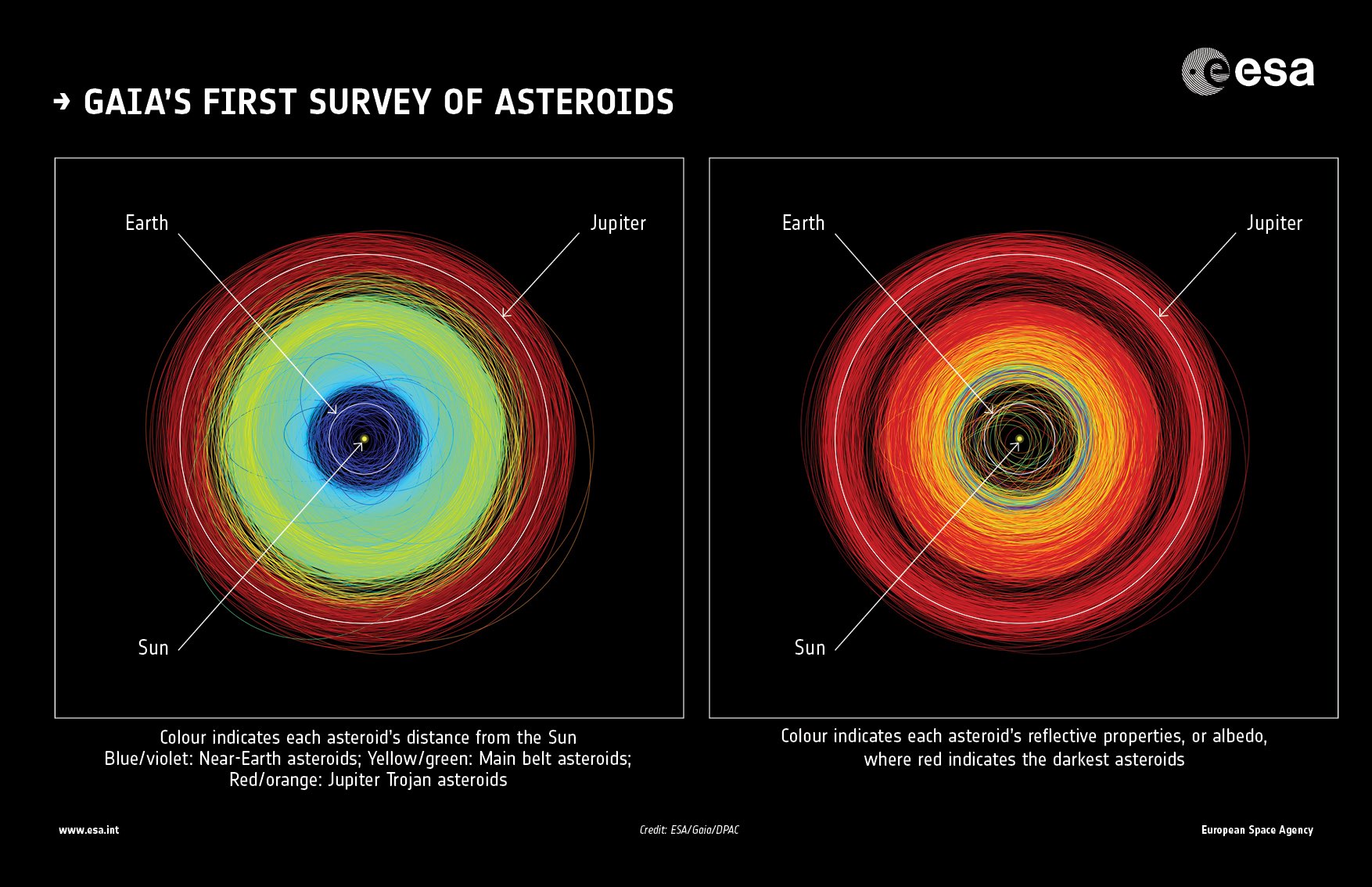 Apart from providing a huge catalogue of almost 1.7 billion stars, Gaia now also serves the solar system community with its first survey of asteroids, released on 25 April with the Gaia second data release. In this image of the week a short history of Gaia's asteroid survey is given.

Before launch in 2013, an illustration was published on Gaia's expected advantage to probe the asteroid blind spot (Illustration on 22/10/2013: Gaia will probe the asteroid blind spot). Gaia operates from the second Lagrange point L2 of the Sun-Earth system, a point that moves along with Earth while Earth orbits the Sun. From this location, Gaia is capable to discover small bodies orbiting the Sun inside the Earth's orbit. From Earth, these objects are mostly unobservable. An artist impression animation shows what Gaia can observe with respect to what can be observed from Earth.

During commissioning (a phase during which all operations to prepare for the routine operational phase are performed), an article was published that gives "Predictions for the Detection of Earth and Mars Trojan Asteroids by the Gaia satellite" (Story on 06/01/2014: Asteroid detection by Gaia). Several test observations were obtained during this phase, also revealing some asteroids moving through the Gaia focal plane (Story on 03/07/2014: IoW: Asteroids at the photo finish - Blog: Asteroids at the photo finish)

Once Gaia started it's routine operations, time came to test the processing pipeline for asteroid detection. Eight months of Gaia data and a sample of 50,000 asteroids were used to test the detection efficiency of the software in the Gaia processing pipeline. More information on this test can be found in this image of the week story of 31/07/2015: Asteroids all around (or the accompanying story: Gaia's asteroid detections).

With Gaia's first data release, the precise astrometry of the stars started to make observation of asteroids through stellar occultation methods more easy. Only a few days after the release of Gaia DR1, the predicted shadow path of the stellar occultation by minor planet (671) Carnegia was updated using the more precise position of the to-be-occulted star from Gaia DR1. This allowed for an amateur astronomer in New Zealand to successfully observe this occultation (21/10/2016: First post-Gaia asteroid occultation success: a feedback from amateur astronomy).

While the Gaia Data Processing and Analysis Consortium was working towards the second data release, a short story on how Gaia reveals the composition of asteroids was published, discussing what the data from cycle 1 of the processing revealed and to show the potential of Gaia with respect to this type of analysis (24/04/2017: Gaia reveals the composition of asteroids).

More stories discussing Gaia's road to observing Solar System objects were published in 2017: Gaia turns its eyes to asteroid hunting and Asteroid Gaia-606 on 26 October 2016. To show the selection of asteroids detected by Gaia that would be published in the second data release, a video was created which can be found here: Selected asteroids detected by Gaia between August 2014 and May 2016.

Asteroids as detected by Gaia between August 2014 and May 2016

The impact of again more precise positions of stars given by Gaia's data release 2 was illustrated with the pre-release of a few Gaia DR2 stars to allow for improving the predicted occultation path by asteroid Chariklo. More information on this stellar occultation and Gaia's impact can be found here: Chariklo stellar occultation follow-up.

The first survey of asteroids by Gaia was released on 25 April 2018 and is part of Gaia's second data release. This first survey is described in these stories: Gaia's first asteroid survey (see Figure 1), Solar System Objects in Gaia DR2, Gaia's view of more than 14,000 asteroids.

Visualisation of the Gaia DR2 asteroids

In the below figure, the orbits of this full set of 14,099 asteroids are given each with a very specific colour code: coloured by perihelion distance (on the left), coloured by eccentricity of the orbit (in the middle) or coloured by the albedo of the asteroid (on the right).