The Gaia sky in colour 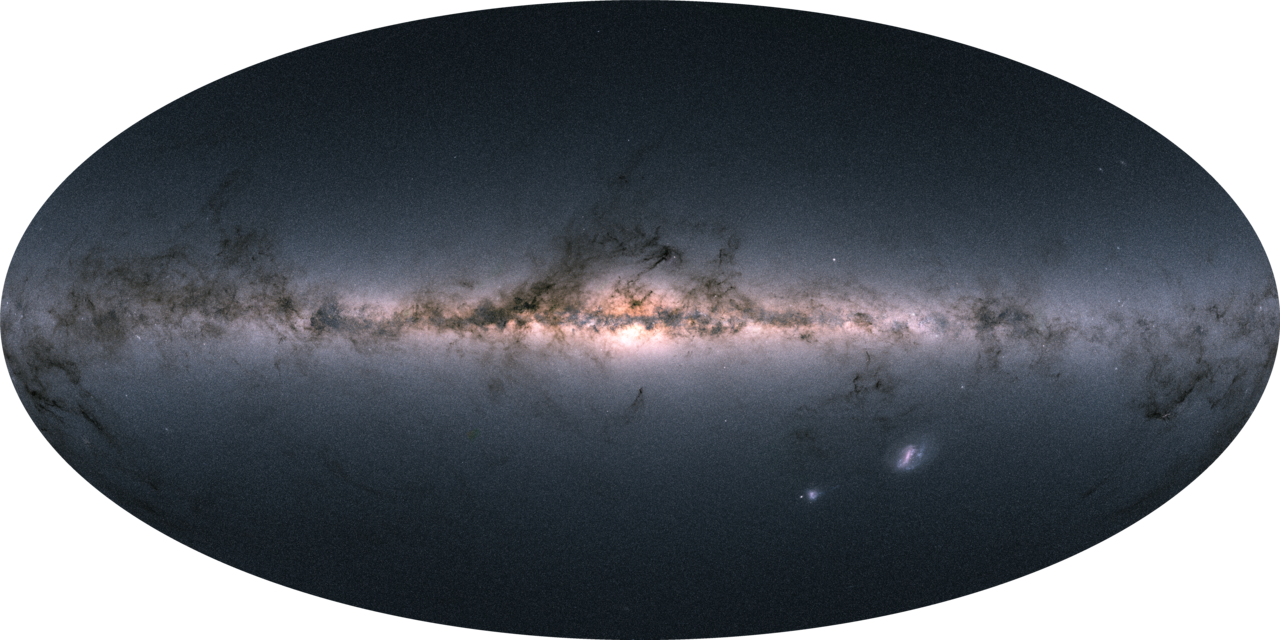 Although this picture resembles a photograph, it is not a photograph! It is a map of the measured brightness, or flux, of the almost 1.7 billion sources in Gaia DR2.

The map is in fact a composition of three other maps, separately compiling the fluxes measured in the Gaia G, GBP and GRP photometric bands. These individual maps are built by adding, or integrating, the flux of all sources that fall within each pixel. A logarithmic re-scaling is  applied to compress the huge range of integrated brightness throughout the sky. The GRP, G and GBP maps are then used as R, G, and B channels respectively, combined and post-processed to create a coloured image.

In Gaia DR2, approximately 300 million stars will not have GBP and GRP flux measurements. Areas without these measurements will look green since only the G band measurements will be available there. Thus, green pixels and green patches do not represent strange astrophysical objects, but are simply measurements missing at this stage of the mission. For aestethic reasons, an alternate version of the map was produced with most green pixels substituted by gray pixels. This is the map here presented. Versions of the map without this cosmetic fix can be seen in the Gaia DR2 summary paper by Brown et al.  "Gaia Data Release 2: Summary of the contents and survey properties" or in the archive visualisation service (a link to this service will be added later).

Just like in the production of plane maps of the (spherical) Earth, a projection is also required for representing the celestial sphere on a plane picture. For these maps, a Hammer projection of the Galactic plane was chosen. In this projection all pixels have the same sky-area.

In addition to the coloured map, a source density map has also been produced and can be found here. In contrast to the all-sky flux view the brightness scale is set by the concentration of stars. While in a flux map a single bright star can outshine thousands of fainter stars, in a density map, concentrated groups of very faint stars can actually stand out.

Higher resolution zoom-ins of selected regions such as the Small and Large Magellanic clouds, Ophiuchus, several globular clusters, and more, have also been created. These will be published by ESA Science & Technology.

The coloured map, the individual maps of the GRP, G and GBP bands, the source density map and many other visualisations of the Gaia DR2 contents can be interactively explored in the Gaia Archive Visualisation Service (GAVS). A full description of GAVS and of the production of the images will be presented in the paper "Gaia Data Release 2: archive visualisation service upgrade" of the Gaia DR2 special issue.