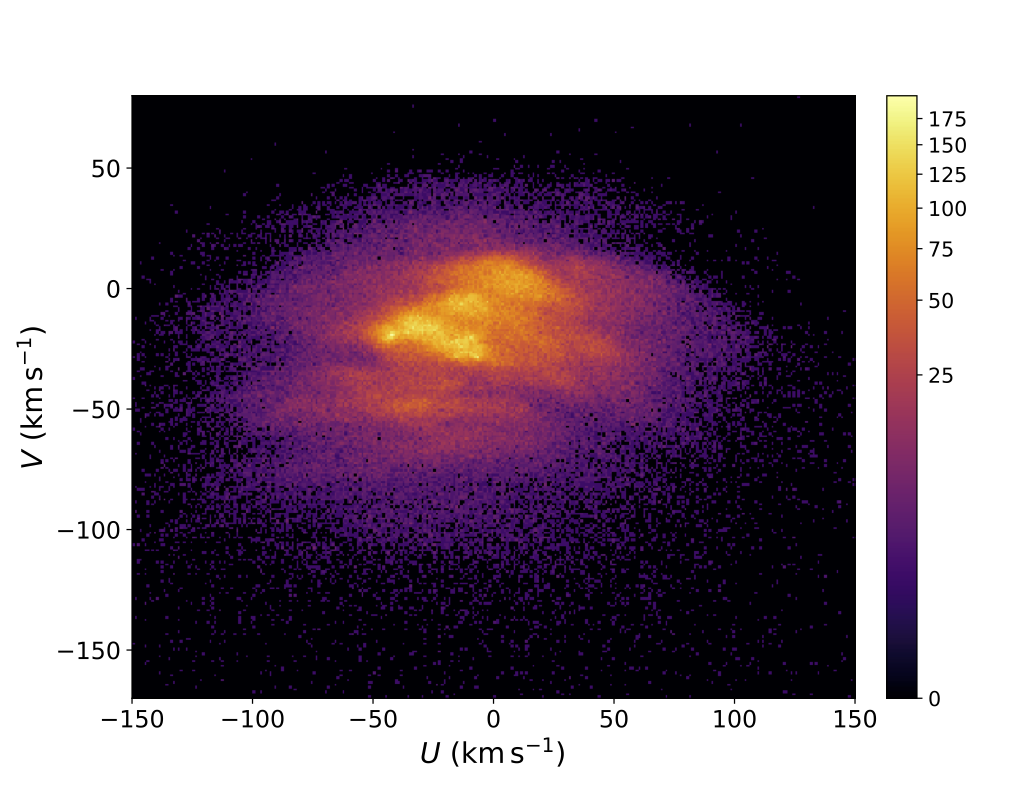 Gaia velocity distribution of stars in the Solar neighbourhood. The image shows the velocities of  366 182 stars closer than 200 pc. It is a 2D histogram of the Galactic radial velocity (horizontal axis) and the velocity in the direction of rotation (vertical axis), in the reference frame of the Sun's movement.

The velocities of stars in our Galaxy are an outstanding source of information about the current structure of our Galaxy but also about its past. This is because the stellar orbits tell us where the stars come from, and moreover, the orbits are determined by the gravitational potential of the Galaxy and its evolution. The Gaia DR2 astrometric measurements and radial velocities make the largest, most precise and most extended sample of stellar positions and kinematics (6D phase space coordinates) inofour Galaxy. This sample has been explored in the paper "Gaia Data Release 2: Mapping the Milky Way disk kinematics" by Gaia Collaboration et al. 2018, which is one of the science demonstration papers chosen by DPAC for a first test and validation of the Gaia DR2 data.

The image shows the velocities of the stars closer than 200 pc to the Sun, in what is called the Solar neighbourhood. This has been the region of the Galaxy better explored prior to Gaia, where perhaps no big changes were expected. Yet, the quality of the Gaia data is so magnificent that a new velocity plane is revealed. We observe that the distribution of stars is highly patterned, with stars organised in thin nearly horizontal arches never seen before. It is just as we have suddenly put proper glasses on, and we see this velocity distribution with much detail that we were not able to discern before. It is the impressively large number of stars in the Solar neighbourhood, which is one order of magnitude larger than for previous surveys, and the excellent precision of the velocities, well below 1 km/s, that makes this discovery possible. We also observe tiny over-densities as yellow small peaks corresponding to well known open clusters, such as the Hyades or Pleiades, that now appear to be highly resolved.

The presence of kinematic substructure around the Sun has been known since before the time of the Hipparcos satellite, but never with such a level of detail as with the new Gaia data release 2. This new arrangement of stars in this plane indicates that the Solar neighbourhood is an authentic Galactic crossroad with clear groups of stars following different paths. The origin of such substructures has been related to several Galactic processes: bound and dissolving clusters, dynamical orbital effects of the spiral arms and bar of the Galaxy, accreted groups of stars from Galactic satellites, and perturbations induced by close passages or crossings of satellites. This new arrangement of stars in the velocity plane observed by Gaia now demands for a revision of all these hypothesis.

In the paper we have also explored the mean velocities and dispersions in a much larger region of the Galaxy disc. Compared to previous studies, Gaia offers us a view of the velocity field with unprecedented accuracy, precision and spatial resolution, and furthermore, a view of the field in all directions thanks to the Gaia whole-sky coverage. With these new velocities, one can observe the velocity field in 3D and dissect it in many different layers and directions. We have observed streaming motions in all the components of the velocities as well as patterns in the velocity dispersions. These kinematic features are totally unexpected for an axisymmetric Galaxy in dynamical equilibrium and, thus encode important clues of the Galaxy structure and history.

In the paper a simple exploration of the velocity field of the disc of the Galaxy with Gaia DR2 data has already unveiled fascinating findings. In the coming years, the complexity and richness of the Milky Way disc kinematics uncovered by Gaia after the 25th of April will be subject of a vast new area of research that will engage to all the Galactic scientific community towards a closer view of the reality of our Galaxy and its past.