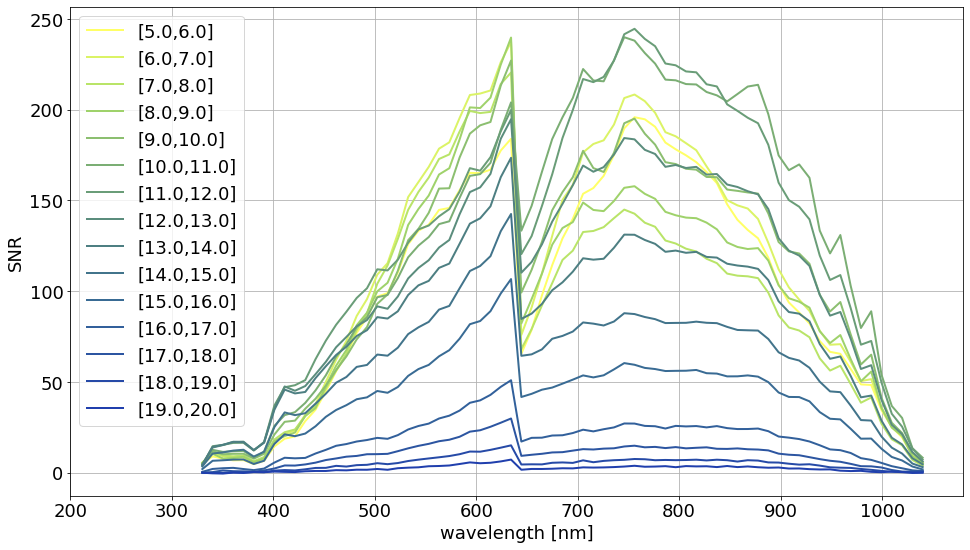 The upcoming 3rd Gaia Data Release (Gaia DR3) will introduce for the first time BP/RP mean spectra in the wide range of Gaia data products. The exact number of sources for which BP/RP mean spectra will be published is still undefined but it is expected to be of the order of 100 million. The vast majority of these sources will be brighter than 17.6 in G but a few specific selections of fainter sources will also be included.

The community is eagerly awaiting this data set. With the aim of helping future users assess the suitability of this data for their use cases and defining strategies to achieve the best results, we provide in this image of the week an estimate of the expected signal-to-noise ratio (SNR) in the BP/RP mean spectra in Gaia DR3. Software utilities to facilitate the usage of BP/RP spectra are also being developed and will be released to the community in advance of Gaia DR3.

This analysis is based on a selection of sources of intermediate colour (0.0 < BP-RP < 2.0), far from the Galactic Plane, (nominally) not affected by crowding and covering a wide magnitude range (5 < G < 20). This wide magnitude range was selected for completeness, even though very few sources with BP/RP mean spectra in DR3 will be fainter than G=17.6. An additional criterion applied in the selection process was that only sources with a number of transits between 30 and 40 would be selected. This is to ensure that these results are representative of the Gaia DR3 release, however users should remember that due to the Gaia scanning law, sources in various areas in the sky will get significantly different numbers of observations. Of course the SNR is expected to increase with the number of observations.

It should also be mentioned that in the case of Solar system objects, the lower average number of observations and the challenges due to the significant motion of these objects during a transit across the focal plane, lower SNR is to be expected.

BP/RP mean spectra will be provided as a continuous function defined by a combination of a set of basis functions. In order to estimate the SNR at different wavelengths, the spectra have been sampled at regular intervals (every 10 nm) in the absolute reference system. This provides a value and corresponding error in units of W nm-1m-2. The SNR for each sample is defined as the ratio between the value and its error.

The plot above shows the SNR as a function of absolute wavelength averaged over sources within magnitude bins. Some of the features seen in the plot can be explained knowing the characteristics of the instrument and the available observing strategies. The oscillations in SNR for sources in the magnitude range 5 < G < 11 for instance are due to different effective exposure times applied when observing sources in different magnitude ranges. The drop in SNR between 630 and 640 nm is due to the switch between the red edge of the BP spectrum (where the resolution is about 20 nm per sample) and the blue edge of the RP spectrum (with a resolution of about 6 nm per sample). Other features are an effect of the procedures that lead to the generation of absolute spectra: the steep slope in the transition between 630 nm and 640 nm is artificial and is due to the algorithm adopted to “merge” the BP and RP spectra into a single absolute spectrum. 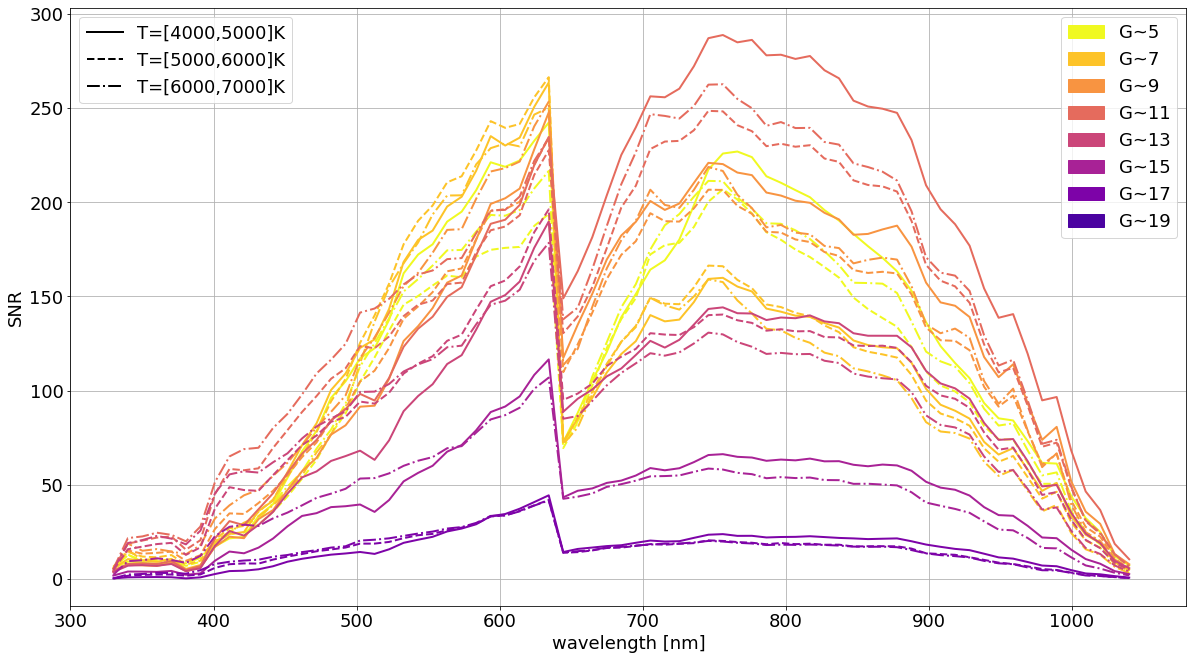 Figure 2 shows the effect of temperature on the SNR. Spectra of about 50 sources randomly selected far from the Galactic plane in a grid of magnitude and temperature were used to generate an average SNR. Different magnitudes are shown with different colours, while different line styles are used for different temperature ranges. As expected for a given magnitude hotter source will have higher SNR in the bluest wavelength regions.

The BP and RP instrument design was driven by the need to achieve two main goals: providing accurate and detailed colour information for the calibration of chromaticity effects in the astrometric solution and allowing source classification (for stars, galaxies, QSOs, Solar system objects, etc.) and parametrization (e.g. Teff, [M/H], log(g), etc.) for all targets across the astrophysical parameter space with particular attention to those types that are considered critical for the unravelling of the structure and formation history of the Milky Way.

Even at the low resolution of the BP and RP instruments, the resulting spectral energy distributions contain key astrophysical information for a vast number of sources. Gaia DR3 will contain many results from the analysis of these data and this will help the user to more efficiently exploit the spectra.

Thanks to the excellent signal to noise ratio in some wavelength ranges and calibration in flux at the few percent level, the availability of BP/RP mean spectra for a large subset of the Gaia DR3 catalogue (a subset of size comparable to current photometric surveys) will open exciting opportunities for the scientific community.