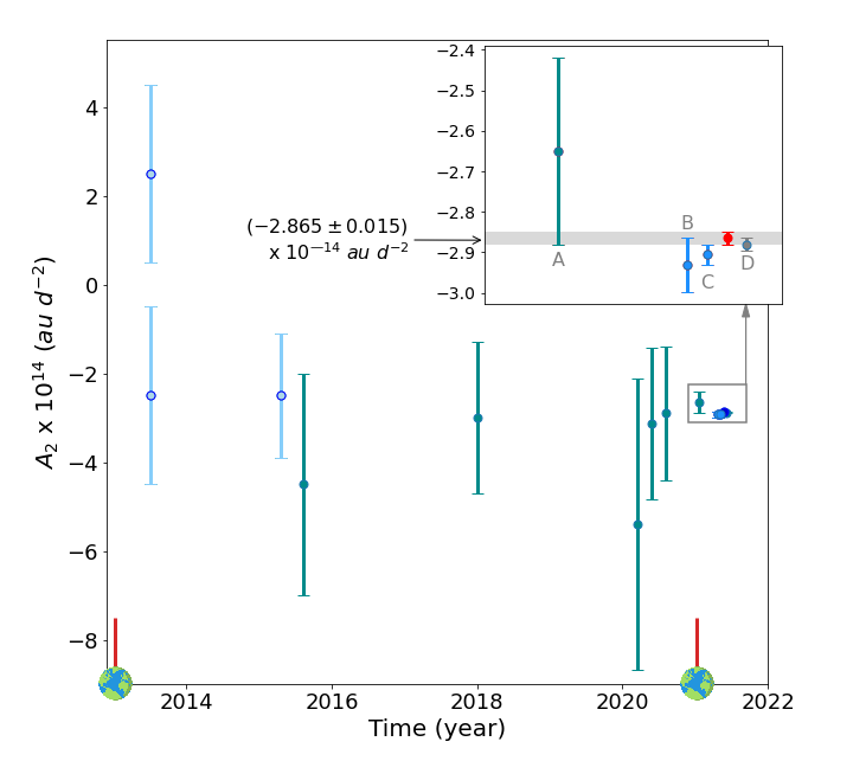 Figure 1: Evolution in time of our knowledge of the average Yarkovsky acceleration for 99942 Apophis. The light blue data represent the early theoretical estimates from approximate models of the physical properties of Apophis1. Note that the sign of the acceleration is not known for the early estimates. The other data are measurements enabled by the collection of more optical and radar astrometry. On the horizontal axis, close encounters with the Earth (enabling collection of accurate astrometry) are marked. The inset shows the last estimates compared to our value, in red, obtained from all the observations available on March 15, including the occultation observed on March 7, 2021. The other values shown here are the best measurements available in January (A), the improvement with subsequent optical data during the close encounter (B), and with the addition of radar (C). Considering the occultation results, the error is reduced by nearly a factor 2 (red point) with respect to (C), and a factor 20 compared to (A). The (D) solution, with the same data used for our red point, but computed independently by JPL, is compatible with our results, within the error bars. Image credit: P. Tanga, based on existing data and additional measurements.

Well before Gaia published its first astrometric releases, its promising impact for observing stellar occultations by a variety of bodies of the Solar System was thrilling. Those expectations were fully met, and a recent breakthrough shows that reality even surpassed our prospects. On 7 March 2021, and for the first time ever, the occultation of a star by the “hazardous” asteroid 99942 Apophis has been recorded.

Why should we consider this, in many respect, as an absolute first? Occultation predictions are generally challenging, as they result from a very fine-tuned alignment of a star and a body - for instance an asteroid - as seen from specific locations on Earth. The uncertainty on where this alignment will be visible (the “path” of the occultation shadow on the ground, akin to the path of the Moon shadow during solar eclipses) should not exceed by much the size of the occulting object itself. In that way, telescopes can be activated along the path at surgical precision, or even transported in that path, allowing to acquire data at the right place and at the right moment. 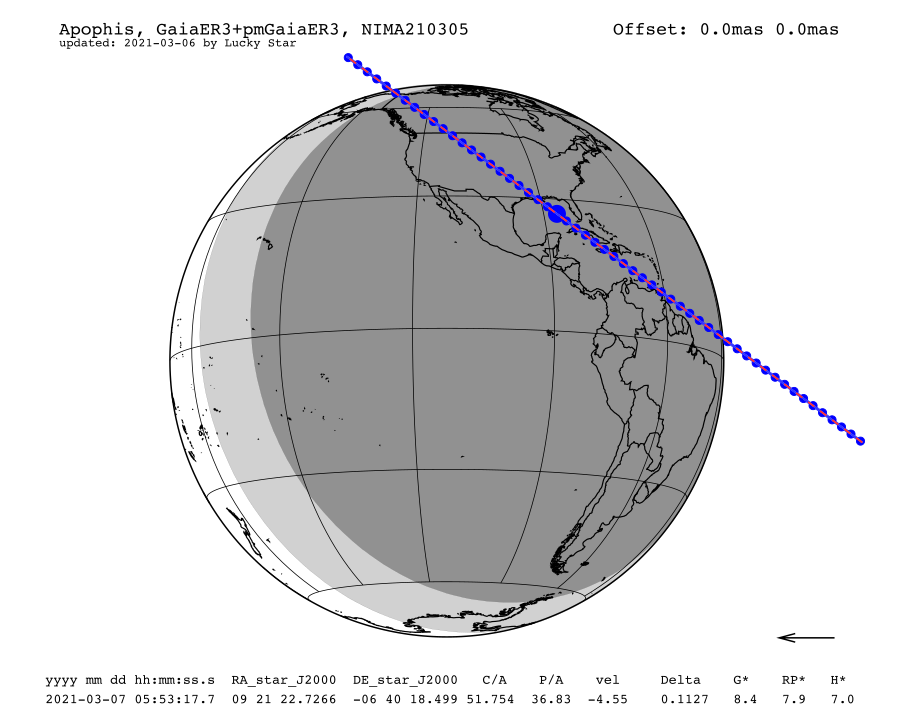 Figure 2: The map of the predicted shadow patch of the stellar occultation by Apophis on 7 March 2021, as published by the Lucky Star project. The straight and continuous lines show the limits of the shadow path as projected on Earth. The big blue dot indicates the nominal occultation time, and the other blue dots are spaced by one minute each. More information on this plot can be found from the Lucky Star Project. Image source: LESIA, Observatoire de Paris, Lucky Star Project

When it works, a success in the observation is extremely rewarding. By timing the disappearance and reappearance of the star, a precise shape and size of the occulting asteroid can be derived. In some cases, rings or a tenuous atmosphere can be revealed and studied. For distant minor planets, such as the Trans-Neptunian Objects (TNOs), occultations represent the only accurate tool at hand to characterize their shape, satellites, atmospheres and rings. No other technique (with the exception of in situ space missions) can actually provide the same level of details.

With the use of Gaia DR1 and Gaia DR2, many challenging occultation events have been predicted and observed, and some results have been illustrated on these pages in the recent years. In that vein, the successful occultation by the 30 kilometre trans-neptunian object (TNO) Arrokoth, that have granted a successful flyby of the New Horizons mission (NASA), stands out. It probably represents the ultimate occultation challenge that Gaia astrometry can face for the outer Solar System. But, another frontier remained to be explored.

At the opposite of the distance scale: the population of Near Earth Asteroids (NEAs). They are in general so small and so fast that their occultations are particularly difficult to predict, and have durations of the blinking of an eye: a few tenths of a second at most, instead of several seconds for Main Belt Asteroids or TNOs. Meanwhile, NEAs are interesting in many respects: some of them are the targets of space missions, and some come close to Earth as potential impactors.

The NEA 99942 Apophis, named after the evil serpent dubbed “Uncreator” in ancient Egypt, is the only asteroid to have briefly topped at level 4 in the Torino impact hazard scale shortly after its discovery. Follow up observations currently rule out the possibility of an impact on our planet on the short term, but this asteroid is still of exceptional interest for its repeated close encounters with Earth – in particular the one on April 13th, 2029, when it will pass 31,600 km above the Earth surface and will become easily visible to the naked eye. Although no observations of Apophis by Gaia are available, the Gaia EDR3 and Gaia DR2 catalogues provided the astrometry of stars surrounding Apophis’ trajectory as seen on the sky. Those stars have been used as references to pin down Apophis’ orbit with exquisite accuracy. 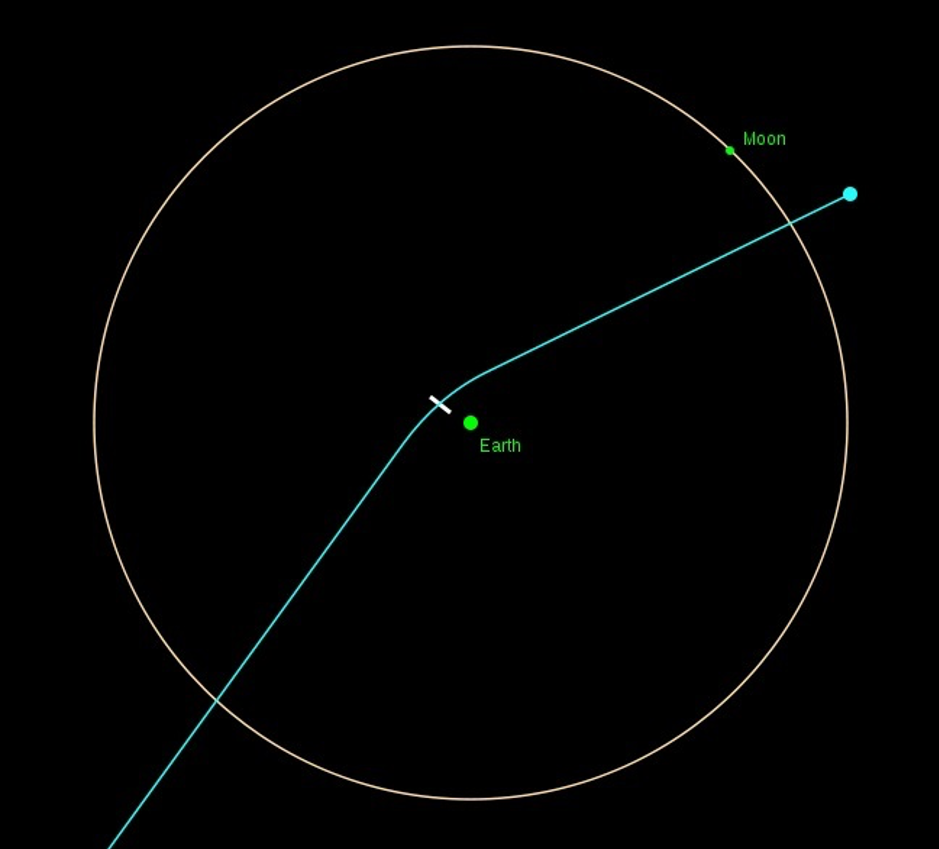 Figure 3: The trajectory of Apophis during the close encounter in 2029, with respect to the Earth and the Moon orbit. It will be so close that Earth gravity could change its shape or its rotation. It will pass closer than the distance to the geostationary satellites. Image credit: Marco Polo, Public domain, via Wikimedia Commons.

During its approach over the last several weeks, the object has been observed several times by telescopes on the ground. Around the time of its closest distance (early March) its position was accurately measured by radar ranging too. In this way, it was possible to predict the occultation of the star NY Hydrae (magnitude 8.4) by Apophis on 7 March of this year, and to draw the occultation shadow path on Earth with an uncertainty of about 1 km. Most important, that star was also observed by Gaia (Gaia EDR3 5746104876938414592) and this provided the accuracy essential to the delicate task. A few bi-static radar measurements of Apophis secured by the Green Bank and Goldstone radio telescopes, and their prompt processing, were fundamental to ensure a last-minute, accurate astrometry. 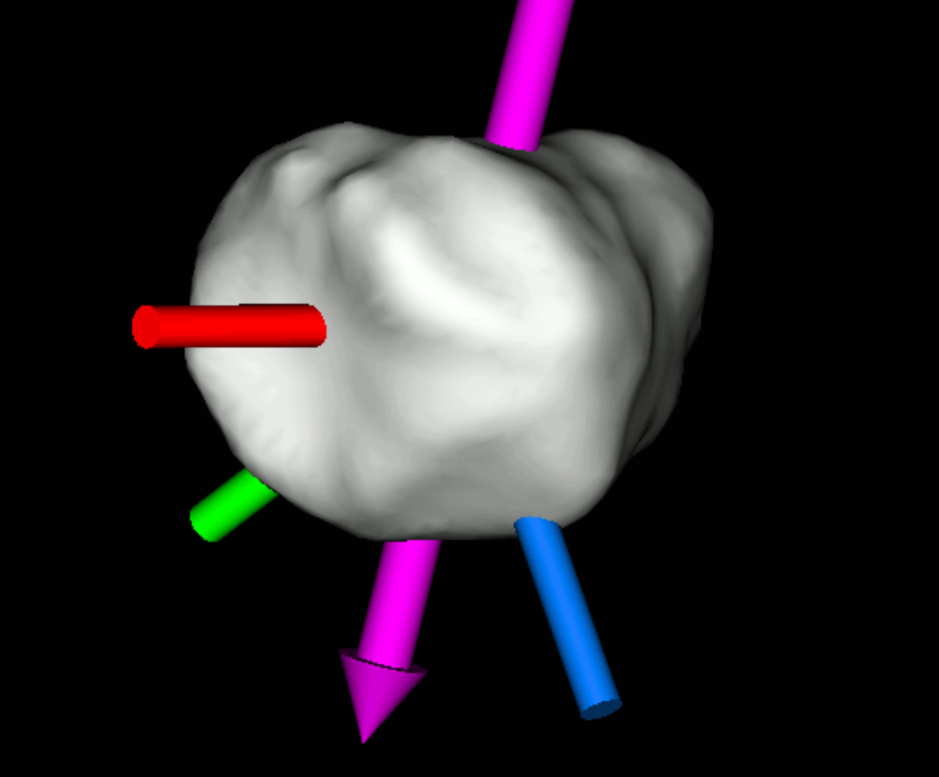 Figure 4: Rendering of the Apophis shape model as oriented at the epoch of the European occultation event (March 11, 2021). The model is derived from radar observations (M. Brozovic et al., Icarus 300 (2018) 115–128) and shows a very elongate shape along the red axis. The purple arrow shows the orientation of the pole of rotation. Image credit: M. Brozovic (JPL, USA)

As the path was predicted to cross through continental US, more than 40 observers, most of them citizen astronomers, deployed telescopes at a regular spacing across the occultation track, some of them with telescopes as small as 8 cm in diameter, which was made possible thanks to the unusual brightness of the occulted star. The invested efforts paid off: three locations in Louisiana, where part of the observers converged, eventually recorded the much awaited star blinking for about 0.2 seconds!

So now, what does this single observation contribute to?

First, useful science. Our occultation measurement provides an extremely accurate position of the object in space. In the case of Apophis – and everything considered – the uncertainty is ~0.3 milliarcsec (mas) only, corresponding to 25 m at its distance, a measurement that compares with the Gaia quality level.

Secondly, we have computed an improved orbit for the object, and then obtained a much better value of the Yarkovsky acceleration, a minute effect caused the emission of thermal radiation from the body. Combining the results obtained from the occultation and radar ranging, the error on the measurement of that acceleration was reduced to 0.5%, a factor 20 times smaller when compared to what was available just a couple of months ago!

What are the consequences of those findings? The exact geometry (timing and distance) of the forthcoming close encounters with Earth (in 2029, and then in 2036…) is extremely sensitive to the amplitude of the Yarkovsky effect, that was particularly difficult to measure in the case of Apophis. A precise knowledge of this effect will be thus very useful to predict the geometry of the next near-miss of Apophis with our planet.

Eventually, this occultation opens bright perspectives: it was the first time that such a small NEA (approximately 340 x 170 m) was successfully observed by this technique, pushing the limits of the approach and paving the way to other detections. The previous record, set in 2019 with a sequence of occultations by the 5-km NEA 3200 Phaethon, is pulverized. The ten-fold increase of accuracy means access to many more occultations by smaller NEAs.

For the sake of completeness, we add that a new positive observation of an occultation by Apophis has been secured in the US on March 22, while an attempt in Europe failed mainly due to heavy clouds, preventing to adequately cover the predicted path (negative recordings were obtained at 2 stations in Greece). Our teams are now preparing future occultations by NEAs in the ~km size range, including objects such as the binary asteroid 65803 Didymos, the target of the NASA/DART and the ESA/Hera missions. Last but not least, as illustrated once more by Apophis, amateur astronomers with modest equipment can contribute to outstanding results in a citizen-science approach. This collaboration is so powerful that it can obtain astrometric measurements of asteroids at the accuracy of Gaia, allowing an improved assessment of the hazards posed by these little interlopers!